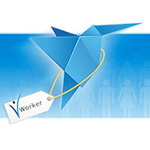 I received an email yesterday me know that Freelancer.com has been acquired by vWorker. I’d never even heard of vWorker, though I have heard of RentACoder. Here’s what the letter from Matt Barrie, Freelancer’s CEO, said:

Freelancer.com is proud to announce that we have just acquired vWorker!

Headquartered in Tampa, Florida, vWorker has over 2.5 million enterprise and professional users from around the world, who have been paid over US$139 million through the site from 1.3 million projects.

Founded by Ian Ippolito in 2001 originally as RentACoder.com, the marketplace was one of the earliest companies of its kind in the world. It rapidly developed an exceptional reputation for attracting quality programmers and grew at an astonishing pace. From 2007 to 2010 RentACoder.com was named by Inc. magazine as one of the 5000 fastest growing private companies in the USA. In 2010, Entrepreneur Magazine called RentACoder “one of the hundred smartest, most innovative, hands-down brilliant companies on our radar”.

Originally focusing on programming and IT-based work, in 2010 the site expanded to include a wide selection of work categories including graphic design, writing and more. To reflect this expansion, the company changed its name to vWorker – short for “virtual worker”.

Over the next few days, we will be migrating vWorker users onto Freelancer.com. This is great news for our existing users as it makes the world’s largest marketplace even stronger with over 6.6 million professionals! This means more employers, more freelancers, and more opportunities. Current employers will see greater variety and competition among freelancers in the marketplace, while current freelancers will see a marked increase in the amount of work available on the site.

So that sounds like great news coming from Freelancer, which already provided a pretty good community for virtual workers and the cost-conscience companies who occasionally outsource work. According to their blog post, current employers will see a greater variety of freelancers in the marketplace and freelancers will see a marked increase in the amount of work available.

For people who were part of the vWorker community, they’re offering a certain number of months of free standard membership along with a certain amount of freelancer credits depending on the amount earned by those members of vWorker.

I’m actually a fan of Freelancer as both a way to look for freelance (work at home) possible jobs and projects, but also as a small business owner who recruits help from outside sources from time to time. If you’re unfamiliar, here’s how Freelancer.com works:

We’re affiliates of Freelancer.com because they offer a valuable and reasonably priced service to those looking for legitimate work at home jobs, as well as for companies looking to outsource projects.