I swear, I’m not making this up. I’ve seen the Bruce Willis movie, you know, the one where robots interact for people in the futuristic world where humans live in isolation, controlling said robots from a control room inside their homes?! If you haven’t seen Surrogates, here’s a clip:

I remember thinking, after watching that movie, that the idea of robotic surrogates really wasn’t that far fetched. As I type this I’m avoiding my Wii personal trainer and we’re getting xbox kinect for our big family holiday gift this year (which supposedly gives my virtual personal trainer even more information about me and my lack of controlled yoga movements).

I really didn’t think having a robotic surrogate representing me in some physical office location would be a real possibility within the year, but guess what. The future is here!

Trevor Blackwell and his company are planning to change telecommuting as we know it by offering the ultimate telecommuter’s avatar – Anybots QB Telepresence Robot.

I’ve seen mention of it on PC Mag, Wired, and VentureBeat, just to name a few, and there are more reviews linked to on the Anybots website here: http://anybots.com/#reviews.

QB, the 35-pound robotic surrogate, comes with a docking station that you set up in the office. Then, when you’re ready to attend a meeting or roll around interacting with the folks in the office, you control him using a browser based app and your keyboard arrow keys. Just remember to get QB back to his docking station before his battery runs out so he’ll be ready to roll out the next time you log in.

Check out Shira Lazaar’s interview with Trevor Blackwell on CBSNews.com

Want to test drive one? Me, too! But there aren’t any public robots are accessible right now, though they say public demo robots are coming soon at Anybots HQ.

They were taking pre-orders when I first visited Anybots.com over the summer and it looks like they’re still taking pre-orders, though they note shipping has started this month. The price for each QB telepresence robot and a charging station? $15,000. You can purchase additional charging stations for $500 should your anybot have a lot of room to roam. 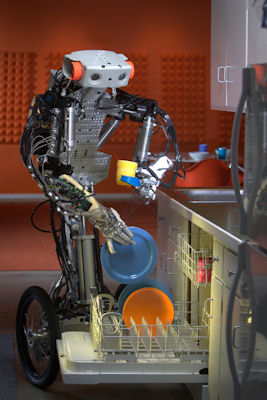 I’ve always dreamed of being in two places at once.

Maybe soon I can be!

If anybot’s QB did laundry, I’d definitely order one.

I’m joking, but it looks like Monty, one of the Anybot research robots, is already doing the dishes. So maybe a laundry-bot isn’t too far fetched. A girl can dream.