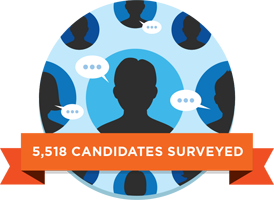 CHICAGO, Oct. 17, 2013 /PRNewswire/ — What can be a deal breaker for landing a new job or finding the right candidate? What do employers expect from candidates and vice versa? A new study from CareerBuilder answers these questions and more, providing unique insights for both job candidates and the employers who want to hire them.

The survey, which included 5,518 job seekers and 2,775 hiring managers, was conducted online within the U.S. and Canada by Inavero on behalf of CareerBuilder and completed in July 2013.

“There can sometimes be a disconnect between what employers and job seekers expect in the hiring process,” said Rosemary Haefner, vice president of Human Resources at CareerBuilder. “Our study evaluates how different perceptions and behaviors have evolved among these two groups, and what can help or hinder the recruitment and job search experience.”

Be ready to speak with the top brass. Prepare for every job interview as if you’ll be speaking with the CEO or other senior leader, because that may very well be the reality for some workers.

Make sure your online persona is free of digital dirt. A significant number of employers will use the Internet to discover additional information about a job candidate.

Some of the search activity happens before candidates are even called for a job interview.

Know your audience. While a lack of skills is the primary reason why many employers will dismiss a job candidate from consideration, two other factors often come into play that can knock you out of the running. Look for those companies that are aligned with your work values.

Proper etiquette is required. Not only do you need to make a good impression during the interview, you need to reinforce it afterwards.

If you’re not mobile, you’re not truly accessible. Nearly two in five employers(39 percent) have jobs that stay open four months or longer due to the inability to find people with appropriate skills. Mobile job search is growing at an accelerated rate, and employers who aren’t mobile-optimized are missing out on key talent they need to find quickly.

Reputation can carry more weight than money. When job seekers were asked if they would consider a salary that is 5 percent less than their lowest acceptable salary, a significant number said they would depending on the company’s image and applicant experience.

Job seekers say an employment brand is a must-have. While not a new concept, what is alarming is only 38 percent of employers believe their company has a very clearly defined employment brand. This can adversely impact job seeker perceptions and ultimately application rates.

Unresponsiveness can have a ripple effect. An earlier CareerBuilder study shows that job seekers who don’t hear back after applying to an employer are more likely to stop buying products or services from the company. How much are employers at risk?

Flexibility is the new norm. Job seekers are placing a heavier emphasis on a company’s ability to provide a good work/life balance when they are considering a job offer.

For more insights from the study, visit http://careerbuildercommunications.com/candidatebehavior/

Survey Methodology
This survey was conducted online within the U.S. and Canada by Inavero on behalf of CareerBuilder among 5,518 job seekers and 2,775 hiring managers. The study was fielded between May 20 and July 1, 2013 (percentages for some questions are based on a subset, based on their responses to certain questions). With pure probability samples of 5,518 and 2,775, one could say with a 95 percent probability that the overall results have a sampling error of +/- 1.3 percent and +/- 1.9 percent respectively. Sampling error for data from sub-samples is higher and varies.

About CareerBuilder®
CareerBuilder is the global leader in human capital solutions, helping companies target and attract great talent. Its online career site, CareerBuilder.com®, is the largest in the United States with more than 24 million unique visitors and 1 million jobs. CareerBuilder works with the world’s top employers, providing everything from labor market intelligence to talent management software and other recruitment solutions. Owned by Gannett Co., Inc. (NYSE:GCI), Tribune Company and The McClatchy Company (NYSE:MNI), CareerBuilder and its subsidiaries operate in the United States, Europe, South America, Canada and Asia. For more information, visit www.careerbuilder.com.